It is 7:00 p.m. on a wintry December Wednesday in Ann Arbor. Customer foot traffic to and from the prescription counter at the back of Maple Village II is non-stop. 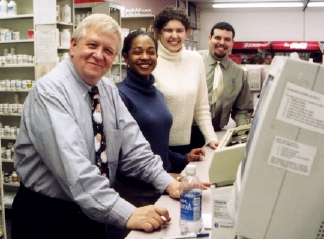 Behind the prescription counter, a white-haired pharmacist moves up and down the aisle — now filling prescriptions, now on the telephone, now at the computer, now talking to customers, now pausing to confer with a technician, a cashier, or one or another of the three pharmacists-in-training.

What’s most remarkable to the onlooker is how well the employees work together: weaving deftly around each other, stepping in to lend a hand without being asked, smiling and courteous despite the rush-hour frenzy.

Welcome to the real world teaching laboratory of community pharmacist Allan Knaak, BSPharm’73, the College’s 2002 Preceptor of the Year.

With fellow alumni Fred Schmid, BSPharm’68, and Stephen Stimac, BSPharm’82, Knaak is part-owner of four independent pharmacies in the greater Ann Arbor area. Although he periodically rotates to the other stores, the majority of his time is spent at Maple Village II in Ann Arbor where he has earned a reputation among his clientele as both a first-rate pharmacist and a caring human being.

“We are in the customer service business, which means we have to earn people’s respect every day,” notes Knaak. “Aside from the daily battles I have with managed care organizations and insurance companies over patients’ access to medications, I really love my job, and one of my favorite activities is working with students.”

That might explain why, in addition to being a preceptor, Knaak employs five U-M PharmD students at his Maple Village II store.

Knaak comments that he could just as easily have been a teacher as a pharmacist. In fact, when he applied for admission to pharmacy school as a high school senior, his back-up plan was to become a teacher, probably in science or math.

“There’s a fulfillment that defies words when you work with a young person who wants to learn what you have to teach,” Knaak says. “But the learning is mutual. Students come in with new things they’ve learned in school and want to talk about it or try to implement it. If you are willing to listen to students and are open to their suggestions, you can learn a lot.”

Knaak says he models his own teaching methods after those of Associate Professor of Pharmacy Dr. Eddie Boyd.

“He was a big influence on my life,” Knaak observes. “He’d say, ’This is what we teach you and why, but this is what you’ll find in actual practice.’ He was usually right on the mark. He always pushed us to advocate for the patient, to make our profession better than how we found it.”

The first day the rotating P4 students arrive at his store, Knaak sits down with them to review expectations.

“Not just ours for them, but theirs for us,” he explains.

Susan Palleschi, PharmD’02, glowingly recalls her rotation with Knack when she was a P4 student.

“In our first meeting, I was overwhelmed with his cheerfulness and openness,” she says. “You could see that Al was very interested in patient care and making sure that patients’ needs were first and foremost. Not only did he spend time on the floor with customers, he often sat with them in the waiting area to discuss medications or just catch up on their lives.

“He had us research over-the-counter products, including herbals and typical cough and cold preparations. We would then review our findings together and apply them. He taught me how to recognize a patient’s needs and where to find non-prescription medication palliatives.

“Al made me a better pharmacist by example as well as instruction. I cannot think of a teacher more deserving of Preceptor of the Year than Al Knaak.”

Palleschi’s observations are echoed by her class-mate, Kathryn Timberlake, PharmD’02, who also rotated with Knaak.

“Al embodied good service,” she recounts. “He was always willing to make special arrangements to ensure that medications got to the customer, even if he had to deliver them himself on his way home from work. In between filling prescriptions, he would patiently answer questions and be joking with the customers.

“Al refuses to let his pharmacy practice become a strict production operation. He’s always looking for new ways to enhance his services, whether it’s buying a bone density meter and offering free bone density screenings, or expanding some other in-depth counseling service. He believes in giving his all at work, but he also leads a full life away from the job. That was a great lesson for me.”