The OPM (Orientations of Proteins in Membranes) database provides 3D structures of transmembrane, monotopic and peripheral proteins whose spatial positions were optimized with respect to the lipid bilayer by the PPM2.0 method. OPM also presents a comprehensive classification of membrane-interacting proteins into different families and superfamilies. It includes protein intracellular localization, structural parameters of TM domains, and links to relevant bioinformatics resources. OPM was integrated with PDB and PDBsum databases.

The PPM (Positioning of Proteins in Membranes) web server calculates rotational and translational positions of transmembrane and peripheral proteins in membranes using their 3D structure as input. 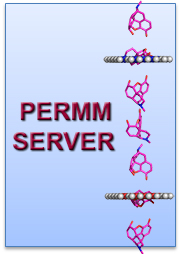 PerMM web server implements our computational method for calculation of binding affinities of molecules to membranes, energy barriers along the membrane normal, and permeability coefficients. The server was developed to assist investigators at early stages of drug development in optimization of cell permeability of new therapeutics derived from natural products. 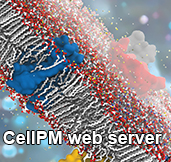 CellPM web server implements a physics based method for analysis of peptide-membrane interactions and prediction of peptide ability to cross the lipid bilayer via an energy-independent pathway. It can use an amino acid sequence or a predefined 3D structure of the peptide to calculate its optimal spatial position in membrane, the energy of membrane binding, the lowest energy translocation pathway across the lipid bilayer, and the permeability coefficient.