“While doing my post-doctoral work at Arizona in biophysical chemistry, I became interested in opioid peptides,” recalls Dr. Mosberg. “I fell into medicinal chemistry, and began applying to positions at colleges of pharmacy across the country. I already had an offer from another institution, but when I was offered an interview at Michigan, I jumped at the opportunity. I had such a large pool of potential collaborators to draw on, I know Michigan was the place I wanted to be. Thankfully I got the offer, accepted the job, and I couldn’t be happier.”

Dr. Mosberg served as associate dean for research and graduate education from 1999-2011 and as senior associate dean from 2011-12. Dr. Mosberg is a leader in medicinal chemistry and drug design, as evidenced by his election as a fellow in both the American Association for the Advancement of Science and the American Association of Pharmaceutical Scientists. His research focused primarily on molecular recognition between small- to medium-size ligands, such as peptides, and their macromolecular targets. He was a member of the University’s Substance Abuse Research Center and served as the director of the College’s Nuclear Magnetic Resonance (NMR) Core from 2000-20. Dr. Mosberg was a member of the University’s Edward F. Domino Research Center. He was instrumental in the establishment of the Vahlteich Medicinal Chemistry Core, a key component of Michigan Drug Discovery, and was selected as the College’s first associate dean for research and graduate education.

“Occupying leadership roles was not something I set out to do,” explains Dr. Mosberg. “My vision of my career in the early days was to be squirreled away in my office focused on research, not working in administration. However, I discovered that I enjoyed administration and it was an opportunity to impact the College more widely.”

While Dr. Mosberg has made an impact on the College, University, and his field, he also leave as lasting impression on his colleagues. 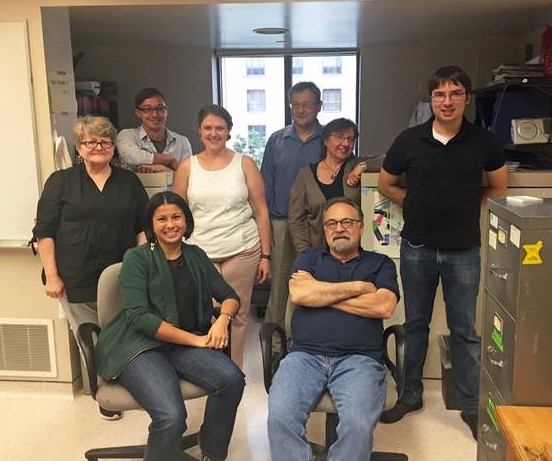 “We all know that Henry Mosberg is a very accomplished scientist, I would like to share a few words about Hank as I know him, as my boss and mentor,” says Kate Sobczyk-Kojiro, PhD, Senior Research Laboratory Specialist.

“Almost a year ago, I was preparing a scrapbook for Hank for his birthday and upcoming retirement. I contacted his former graduate students and postdocs asking them to send me their memories of their stay in Hank’s lab. The outpouring exceeded my initial expectations, since many left the lab years ago. They shared funny stories and personal notes on how having Hank as their mentor shaped not only their future careers, but also their lives. They all expressed their gratitude for both the professional and friendly atmosphere within the group, and for the freedom Hank was known to give newcomers and the trust that they would make good choices.  Many of Hank’s former students became very successful. One is a chemistry department chair, two are scientific advisers at NIH, one is a scientific journal editor, a few work as university lecturers, others are researchers working at universities, private companies, a forensic laboratory, one is an accomplished radiologist, and a couple work at law firms as patent scientists, just to mention a few.”

“I have worked with Hank almost 33 years – half of my life, and these were fantastic years and I consider myself very lucky,” adds Dr. Sobczyk-Kojiro. “We have had numerous discussions about science, lab organization, our private lives, and life as we know it. In all these years, I have never seen Hank angry or impatient. He is always ready to give the benefit of the doubt – a very humble and respectful person and a true gentleman.  And for all this, I owe him an immense gratitude and I am indebted forever. I wish him all the best and that he enjoy his retirement and fulfill all his wishes.”

"Hank has this amazing ability to connect with people and create an environment of trust and mutual respect,” says Larisa Yeomans, PhD, Director, College of Pharmacy NMR Core.  Dr. Mosberg was Dr. Yeomans’ PI when she joined the university as a postdoctoral fellow, and then supervisor when she joined the NMR facility.

“While relentlessly keeping his eye on the scientific targets of our projects, strategy, productivity and data quality, Hank was also kind, approachable and a caring mentor, always ready to listen to our concerns, either of a scientific or personal nature,” continues Dr. Yeomans. “He generously shared his wisdom and experiences to help us put things in perspective. His answers would start with ‘In the grand scheme of things…’ as Hank always advocated for the integral well-being of the researchers in the lab and encouraged us to look at the bigger picture.  He led us with positive encouragement and he always displayed a contagious and genuine passion for his science!"

“I was very lucky to have Hank as my PhD mentor,” says Jess Anand, PhD, research faculty in the department of Pharmacology and Dr. Mosberg’s former student. “He gave me the freedom and respect to really develop into an independent scientist and treated me more as a junior colleague than anything else. He is a kind, patient, steady person who always has time to talk to you about science (or your life), introduce you to a potential collaborator, or read over your work. I'm so lucky to have worked for him and he will be missed at the College of Pharmacy.”

Dr. Mosberg plans to do some consulting work and travel in retirement, once it is safe to do so.  His advice for the next generation of scientists: be lucky. “Embarking on an academic career is a more daunting proposition now than it was when I started my career,” notes Dr. Mosberg. “While there are fewer positions available now, my advice for students looking for academic research positions would be to follow your passion, know what it is that you want to do – even if you fall into it after school like I did! Luck can get you a long way, good ideas and hard work are still the most important components.”